No Costs, No FeesUNLESS WE WIN Real People with Real Results.
Contact Us For a Free Consultation
Home
Practice Areas
Personal Watercraft and ATV Accident 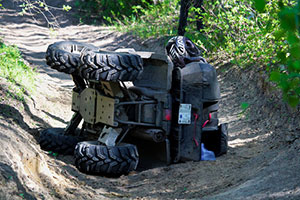 Florida is just about the perfect state for getting outdoors and enjoying the natural beauty that surrounds us. From the endless miles of shimmering water to the rugged country back roads and trails, the Sunshine State is an outdoorsmen’s paradise.

Along with larger pleasure boats cruising the coastline, rivers and lakes here, the wildly popular personal watercraft, often referred to as “PWC’S”, dot the waterways in large numbers. The nimble, high-powered wet bikes can reach speeds of up to 70 mph or more, and take a great deal of skill to handle at any speed.

On dry land, woodsmen, farmers, mud boggers, campers and other enthusiasts are getting around on all terrain vehicles, otherwise called “ATV’s.” Kids tool around on junior-sized, 4-wheel motorbikes, and those a bit older fly through the woods on a 600cc rocket.

Unfortunately, just as you find on Florida’s roads, these two forms of recreational transportation are often involved in serious accidents. The Florida PWC and ATV accident attorneys at Freeman Injury Law understand the complexities of such cases, which frequently involve personal injury or wrongful death litigation, as well as premise liability, defective products litigation and business liability claims against rental companies and others involved in watercraft and ATV rentals and sales.

In 2009, there were over 125,000 PWC’s registered in Florida, approximately 2,600 of which were rentals meant for vacationers to experience. That year there were 143 PWC accidents. The good news is that fatalities have been going down in recent years – in 2008, there were 7 people killed in PWC accidents in Florida. Perhaps not surprisingly, Monroe County, home of the Florida Keys, had the most PWC accidents in 2009, with 25.

The primary type of personal watercraft accident is striking another vessel. The bulk of injuries involve broken bones, laceration, contusions and head injuries, among many others. When a rental company rents a watercraft to an inexperienced rider, or when a watercraft has been poorly maintained or designed, a rider may be able to recover damages as the result of an accident.

In other cases, watercraft riders are frequently shown no respect by other boats on the water. When a rider is injured because of the intentional or accidental actions of another boater, he or she can and should recover compensation for the injuries that result.

The popularity of these four-wheel vehicles has been on the rise in Florida and throughout the nation. On any given weekend, thousands of well-intentioned outdoor enthusiasts roam the woods, swamps and fish camps throughout the state. Hunting, camping, and playing in the mud – ATV riders all share a love for the thrill of exploring the unbeaten path.

The summer season is when most ATV accidents happen, kicked off by Memorial Day and the end of the school year.

There have also been cases in which the ATV was found to be dangerous or defective, resulting in successful product liability lawsuits against the manufacturer. Some of those involved a rollover ATV accident, in which it was discovered that the vehicle was inherently dangerous due to a design with a center of gravity that was too high.

The Consumer Product Safety Commission reports that there are an estimated 8 million ATV’s in the United States. Each year, an average of 140,000 people are treated in hospital emergency rooms for injuries suffered in ATV accidents. ATV accidents kill approximately 750 people annually, about one third of those involving a victim under 16 years old. A factor in accidents involving youngsters is an under-aged driver operating an over-powered ATV. The machine is simply too large and fast for a child to operate safely.

Florida law prohibits the operation of an ATV over 90cc by anyone under 16, and manufacturers are required by law to offer a new rider a government-approved safety-training course. Yet sadly, people young and old are seriously injured or even killed in ATV accidents at an increasing rate each year.

The West Palm Beach PWC and ATV accident lawyers at Freeman Injury Law fight for the legal rights of victims in Florida. We understand the legal strategies necessary to mount a successful case on your behalf. Our team of investigators, injury attorneys and support staff will work tirelessly to help ensure that you receive the financial compensation you deserve if you have been injured in a Florida watercraft or ATV accident.

Call us today to schedule a free, no obligation appointment to discuss your legal rights.